On May 1, 1860 about 12:30pm a fireball was seen over Washington County, Ohio and traveled Northwest towards Muskingum County. Meteorite Fragments rained down upon the town of New Concord Ohio and the surrounding areas.

On May 1, 1860 at about 12:30pm a space invader made its debut over Washington County, OH and traveled Northwest towards Muskingum County. Meteorite Fragments rained down upon the town of New Concord Ohio and the surrounding areas. During the meteors’ fiery entry though our atmosphere the heat and pressure caused the rock to explode and fragment. The point of origin of the explosion was determined to have occurred over Noble County by eyewitness accounts. People from up to one hundred and fifty miles away could hear the explosion. Up to twenty-three distinct separate explosions were heard, each weaker than the last until just a rumble remains. Most described this rumble as a train passing through or a squad of awkward soldiers firing their weapons. The loud bangs that pierced the sky on this May day lasted for about two minutes.

Folks near the epicenter of the main explosion were startled with the ground trembling from the powerful shock wave. Even their homes shook and naturally this made most believe that this event was an earthquake. One of the things that I find truly remarkable about this fall is that towards the end of the meteors’ flight people could actually see the stones falling to the ground. At least that is what people claimed to have seen. Those who saw the stones descending described them as “black specks” and “black birds.” After the meteors’ harsh fire filled decent atmospheric friction slows down the stone(s). At this point they are no longer heated and they enter what we call dark flight.

The strewnfield was found to be about ten miles long and two to three miles wide, extending from Pleasant city up to New Concord. The strewnfield is the area in which meteorites are known to have been found and vary in size. Sometimes a strewnfield is extended or becomes larger because a meteorite hunter has found more meteorites outside of the known boundaries. The large end of this strewnfield is in New Concord, this is where the larger meteorites are found. The small end, where the smaller fragments are found, was near Pleasant city. This information matched and confirmed the direction of the fall that witnesses reported. The largest meteorite recovered was 103 pounds with fresh black fusion crust covering the rock. Atmospheric friction heats up the falling space rock and this causes the surface to melt. This gives the stone a nice black rind that’s called fusion crust.

A Quick Recovery of Meteorites

With this fall being witnessed by so many people, the meteorites that landed were picked up immediately after the event. Those who saw some of the stones crashing to the ground rushed to the site where they stumbled upon black rocks embedded into the ground. One gentlemen was out in his field when he heard a loud sound similar to thunder that continued for about thirty seconds. Upon looking up in an attempt to locate the cause of this sound he saw an object hurtling towards Earth. With a possible landing site observed this gentleman decided to go in search of the object. For once someone in history thought that the object landed very close by and they were correct! He found a stone that had punched into the ground about two feet deep, it was a bit warm like it had been laying in the sun all day. This meteorite weighted fifty-three pounds.

In a circumference of a few miles three more large stones were recovered. The main mass of the meteor, before the explosion, was estimated to be about three-eighths of a mile wide. The amount of material that fell was around five hundred pounds. The speed that the meteor was traveling at was thought to be about four miles per second. The New Concord fall is truly a rare event, not many people get to see, hear, and retrieve a newly fallen space rock. One individual who was plowing a field saw one land about two hundred yards away from him. Once he located the meteorite he found that the rock had struck a corner of a fence on the property. This makes the fall and meteorite a hammer stone event which is extremely rare! Anytime a meteorite strikes a man made object, animal, or human it is called a hammer stone and this makes the meteorite even more valuable. 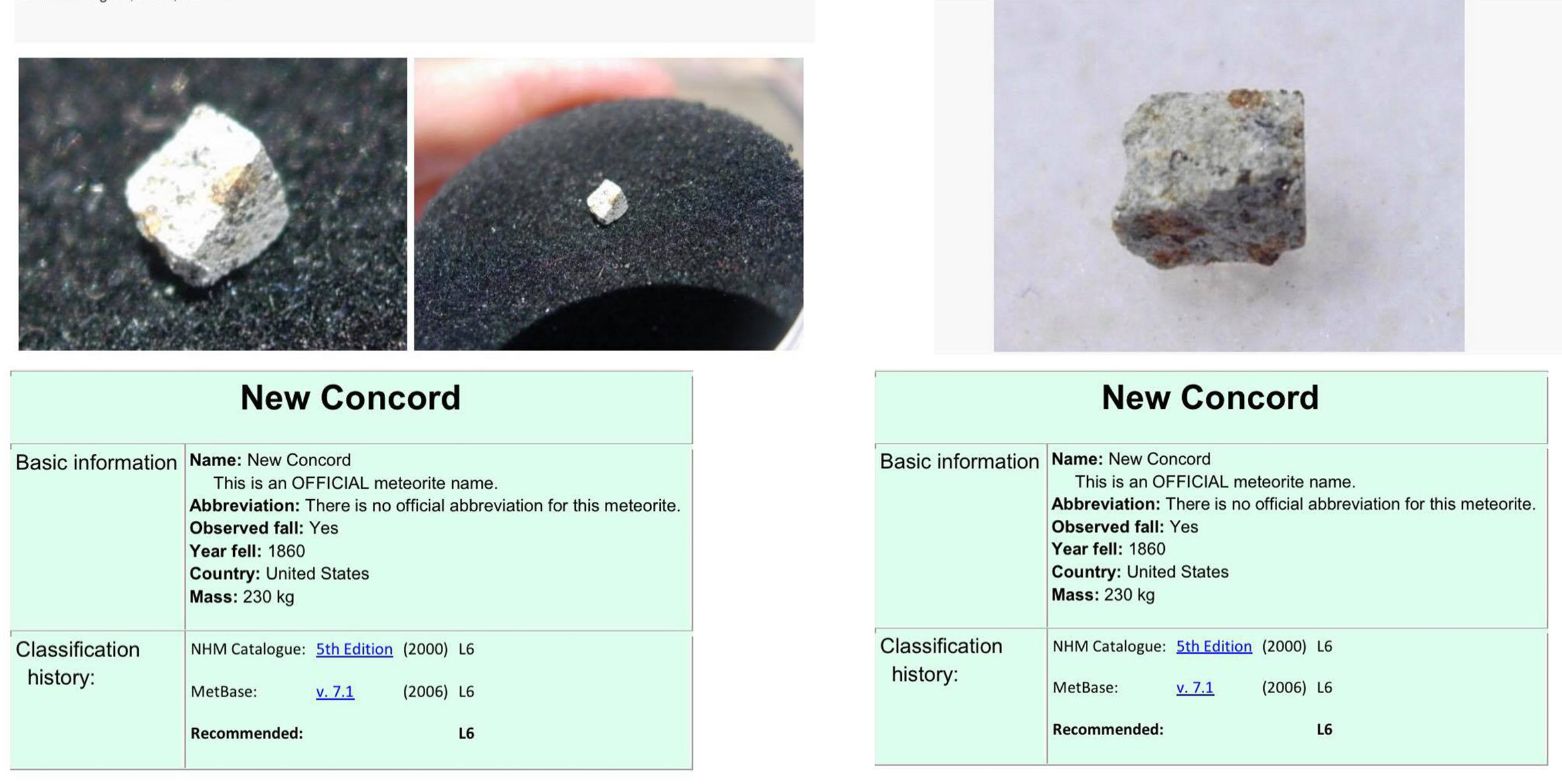 Classification and Whereabouts of The Meteorites

The meteorite was analyzed very quickly which to scientists is invaluable because the rock is fresh and unchanged by our climate. Classification of the meteorite came out to be an ordinary chondrite, an L-6, meaning that it is low in iron. Since the meteorite was so fresh scientists discovered trace amounts of water inside the stone! Twenty four meteorites were recovered and documented totaling only 460.5 pounds. Marietta College located in Ohio has the one hundred and three pound main mass. Personally I’m extremely happy that the main mass got to stay in the area where it fell. Amherst College, also in Ohio, obtained a fifty one and a thirty four pound meteorite. Harvard University was given 29.361 grams and London was given only 19.519 grams. Later Arizona State University purchased one of the New Concord meteorites from Amherst for research.

I’m unsure of how much of the meteorite made its way into the meteorite collectors market. I had heard of this meteorite but the only place that I have seen this space rock is up at the Cleveland Museum of Natural History. They have housed for display a nice huge slice of New Concord, it’s a beautiful thick slice! Someday I’ll have to ask if the curator of the meteorites and minerals knows how they obtained that specimen. Years after the fall it was reported that one of the rocks hit and killed a colt. Unfortunately this was not mentioned on the day of the event or even the days following the fall so this information is not official. Well there you have it, a wealth of information about an extremely rare meteor fall that became a witnessed meteorite shower. Keep your eyes to the sky! This event demonstrates that a massive meteorite shower does indeed happen and it will happen again. It is only a matter of time…

Identificationby Alex FoltaThank you for your request! The patterns you can see in this ro … Read More3 months ago, 1 Reply

Just Joinedby FRANK THOMPSONHey all.....I just joined today and wanted to reach out and say he … Read More11 months ago